Now that we’re facing another tropical threat, it’s time to revisit this blog. Perhaps I should’ve started these updates earlier but I’ve been trying to clear the to-do list so I can focus on Zeta for the next several days but here we are.

Zeta formed this past weekend in the NW Caribbean after a cluster of shower/thunderstorm activity finally coalesced underneath a sprawling area of upper-level high pressure. The storm almost met the criteria for rapid intensification when it became a hurricane yesterday before making landfall in the Yucatan last night. 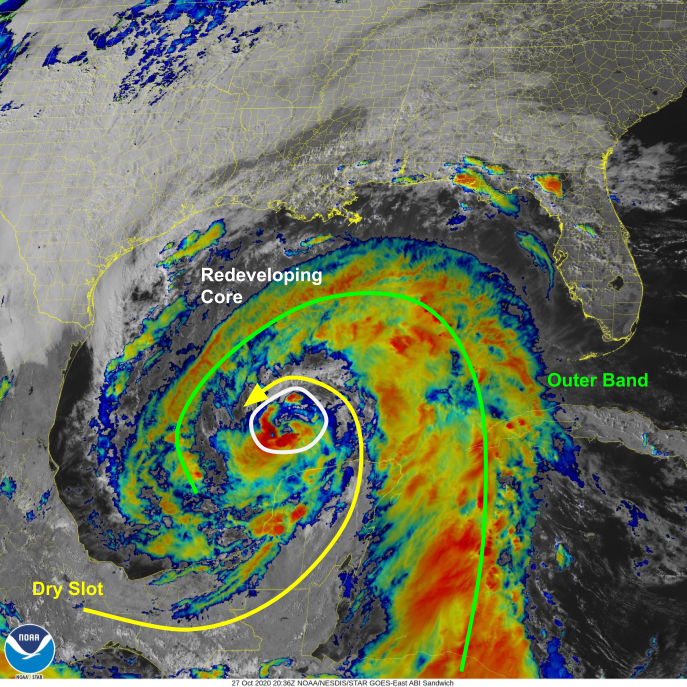 A look at satellite imagery this afternoon shows a very broad system with a dry slot separating the inner core from the primary outer band. This dry slot exists because air originating over southern Mexico and moving over the Yucatan Peninsula can’t pick up much if any moisture as it travels over land rather than water.

As Zeta continues moving northwest away from the Yucatan, air parcels moving into the storm’s southeastern quadrant will originate over the Bay of Campeche rather than southern Mexico. These parcels will be rich in moisture having traveled over warm water for a considerable time. This will help the storm’s convection redevelop tonight/tomorrow.

Speaking of redevelopment, the process is already underway as seen in this loop. Cloud tops have rapidly been cooling as convection redevelops at the edge of the storm’s center. This ring of thunderstorms will eventually become the storm’s eyewall.

With generally favorable conditions and ongoing convective development, expect Zeta to reintensify into a hurricane tonight as it moves NW then begins to turn off to the north. That turn will take place as the storm begins moving between a strong ridge of high pressure over the Atlantic and a strong upper-level low over Texas as seen in the graphic below. 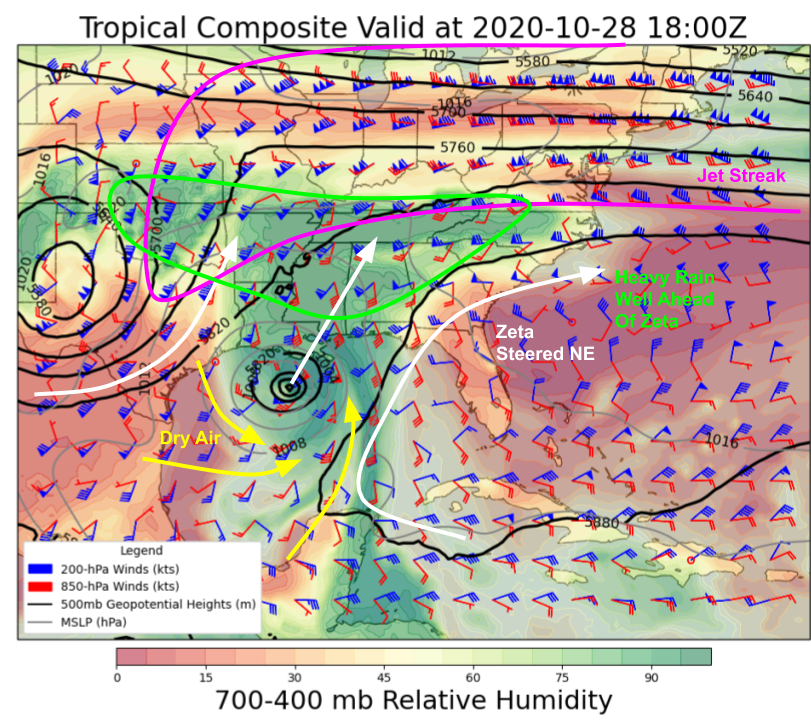 Both these features will be pulling Zeta northeast so the storm will begin to accelerate tomorrow. By the time it makes landfall, Zeta will be racing at around 30 mph. This is great news from the rainfall perspective as we don’t have to worry about a stalling system dropping inches of rain for days. However, it means that the wind threat will increase because the system won’t have as much time to weaken over the cooler waters immediately south of Louisiana. Additionally, dry air likely won’t have enough time to wrap into the storm’s core before it moves onshore. So while the storm will likely not make landfall at peak intensity, it probably won’t lose a lot of steam between tomorrow morning and landfall tomorrow afternoon/evening.

The current NHC forecast, shown above, expects Zeta to make landfall in SE Louisiana as an 80 mph hurricane tomorrow afternoon/evening. The storm’s biggest threats will be high winds that will continue well inland into MS/AL as well as storm surge near the coast. Surge may exceed 5-8 feet in parts of SE Louisiana that are not protected by the levee system as well as parts of southern Mississippi and the southwestern coast of Alabama.

Another threat to keep an eye on is tornadoes along and east of the storm center track tomorrow afternoon/evening. Remember this is a very large storm so rain/wind/tornadoes in the outer bands will impact regions many miles away from where the center actually makes landfall.

After moving onshore, Zeta will zip through the southeastern US bringing gusty winds and heavy rain to a swath extending from near New Orleans to Birmingham Alabama and eventually into the mountains of TN/NC.

During this time, the storm will lose its tropical characteristics as it merges with a non-tropical storm moving northeast from Texas. The non-tropical system that will emerge once these two entities join forces is expected to bring heavy snow to parts of the Northeast on Friday. Though it’s noteworthy to have the remnants of a hurricane bring snow to parts of the northern US, snow at this point in the season isn’t super unusual in New England and interior New York.

I’ll have another update if warranted tomorrow.

Chris Becomes a Hurricane East of the Carolinas